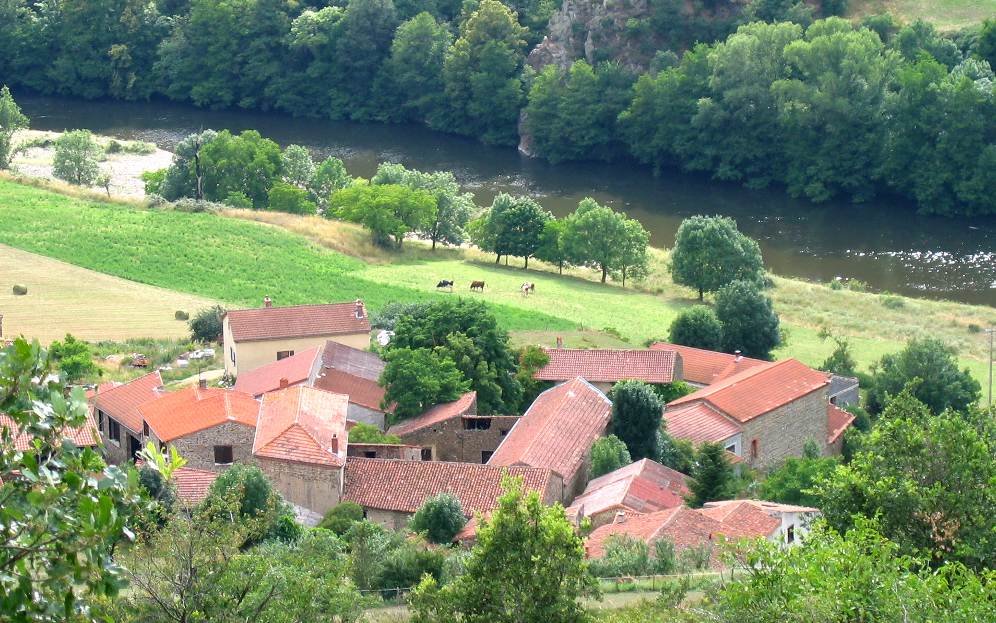 A gite in Auvergne 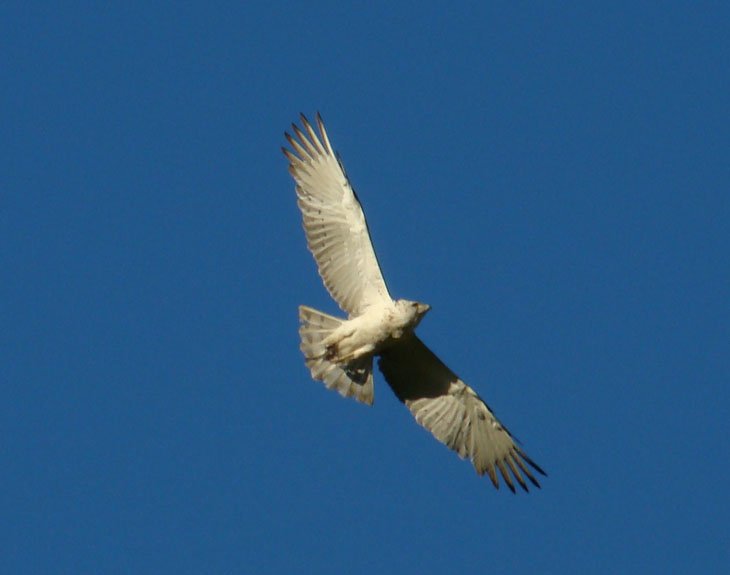 Short toed eagle - Chazieux 2008 - by Jennifer Sjolund
Photo taken from the patio outside Lou Coucaye;
click it to enlarge.

The area is ideal for: nature lovers, ramblers, mountain-bikers, kayakers, ornithologists (see bird watching page). You may see kingfishers, kites, golden orioles, herons, maybe hoopooes, and hear nightingales. The area is famed for its population of; short-toed eagles  which nest on the hill behind the village.

As in many parts of Europe, the climate has been a bit haywire in recent years; but here is what it is like in a normal year...... 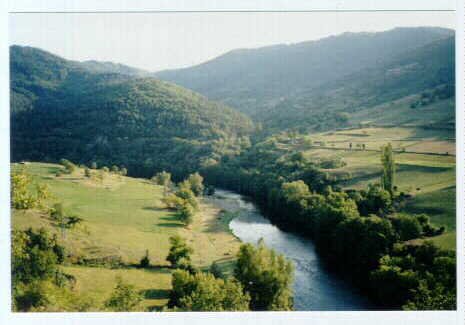 In May, Spring bursts upon the Haut Allier valley with all its force, as the daytime temperatures warm up rapidly. The lusciously green hillsides are ablaze with wild flowers, particularly the bright yellow broom, but also a marvellous mix of buttercups, wild narcissi and orchids, rare pasque flowers (deep red wild anemones - strictly protected) and many more.

June remains a beautiful "green" month, as the early spring flowers give way to white marguerites, mauve scabius and more. The wild narcissi and other Alpine flowers however, are not far — just a few miles by car or even on foot up to the 1000 metre hilltops opposite, where spring comes just a little more slowly.

July and August are normally warm months: as in most of southern France, the hillsides turn a pale golden colour, offset by the deep green of the beech, oak and pine forests opposite. These are the months for kayaking down the river, hiking on the hilltops, picking wild raspberries and bilberries, or just lazing on the village beach, and swimming in the river. (The beach, about 300 yards from the village, offers good swimming, shallow on the near side but up to 3 metres deep by the diving rock at the far side). There is programme of summer concerts (choral, chamber music, etc) in historic churches and other locations in Saint Ilpize and the Haut Allier valley and nearby. In the first half of July, nearby Brioude hosts one of France's premier art festivals, the Biennale de l'Aquarelle, a two-week international watercolour festival, now the biggest event of its kind in France (Every other year - odd-numbered years, 2013, 2015, 2017 etc)

September in Auvergne is a mellow month:  most of the summer holidaymakers have gone home, leaving the valley deserted except for those who live there all year round. Days can still be warm, even hot, but evenings become much cooler. This is a month for relaxation, a time for hikers and wanderers.
By October, depending on how much summer warmth has been soaked in by the thick stone walls, you may need to turn on the radiators;  the trees  turn bright yellow and brown and the fields revert to green. In the early morning, the hills opposite often rise from a sea of mist in the valley below. In 2014, daytime temperatures were regularly in the twenties right up to the end of October.


Natura 2000:
The Haut Allier: a designated area in Europe's environmental heritage.
Chazieux lies at the heart of the Haut Allier area, which has recently been designated as one of France's areas of outstanding environmental value and interest, under the E.U. "Natura 2000" program. The valley has been selected on account of its abundant and rich flora and fauna.
Natura 2000 is a European Union programme designed to select and preserve a complete range of the best surviving natural environments throughout Europe. The château at Saint Ilpize, a short walk from Lou Coucaye

The "Brivadois" region of the Auvergne - the area around the town of Brioude - is rich in history, art, and nature.

A twenty-minute walk from the cottage brings you to the ruins of the mediaeval chateau de Saint Ilpize, perched on a craggy rock 300 feet above the river. The walled keep contains a small romanesque chapel, painstakingly restored in 2000-01. Below the castle is the village of Villeneuve with its suspension bridge high over the river. Between the gite and the castle, there is also a historic vineyard, the "vine conservatory", where the old terraces have been renovated and some thirty traditional  varieties of vine have been replanted with the aim of saving them from extinction.In addition to being a magnificent wildlife area, the Haut Allier is also one of only 41 designated rural "Areas of art and history" in France

A two hour walk (or 20 minute drive) in the other direction brings the visitor to the beautiful small town of Lavoute Chilhac, with its ornithological centre, its 18th century abbey, its high mediaeval single-arch bridge over the river, and its old tall narrow houses, between river and hillside.

Brioude is a very attractive old market town, with narrow streets, small shops and a very fine romanesque basilica of Saint Julian, famous for its unique early mediaeval mosaic floor and its mediaeval frescoes.
This is the largest Romanesque church in Auvergne, a pilgrimage church which is the St.Julian's church among all the other St. Julian's churches worldwide; it was in Brioude that Saint Julian, a Roman centurion, was martyred; his relics lie in the crypt of the basilica.
Indeed, the whole "Haut Allier" area is rich in romanesque churches (many with frescoes), cloisters, and castles — from imposing mediaeval keeps to the château de Lafayette - birthplace of General Lafayette. 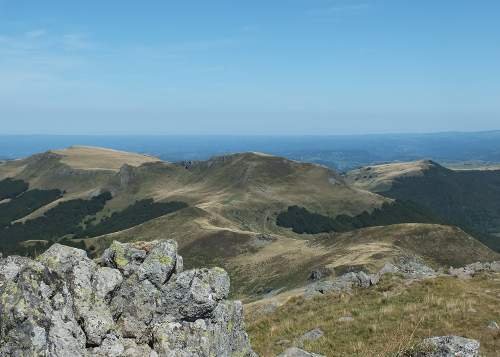 For hiking, Auvergne is a fabulous region. There are hundreds of walks in easy striking distance of the gite - even right from the doorstep.

Lou Coucaye has maps and trail guides for local walks.

A little more than an hour away are the Plomb du Cantal or the Puy de Sancy, the highest points in Auvergne and the Massif Central culminating at around 6,000 ft, offering excellent hill walking and mountain biking. Both peaks have cable cars.

A popular day trip is a drive to the high "pas de Peyrol" pass in the Cantal mountains, from where the energetic can climb to the top of the Puy Mary, and the even more energetic can embark on lengthy ridge walks (photo).

There are two or three companies offering kayak and canoe hire (+ pick up and return) at Langeac, Lavoute Chilhac or Villeneuve d'Allier. Bikes can be rented in Brioude; and sometimes there may be bikes available for free hire at the gite. 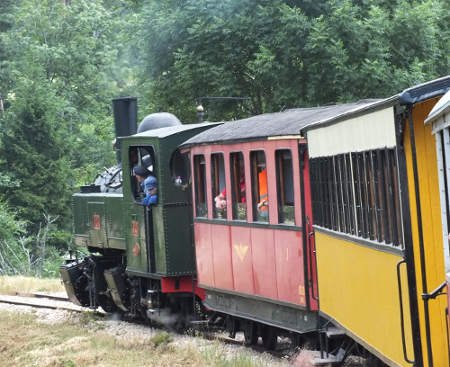 The Haut Velay railway - a popular day out for the family
Remarkably for France, the Haute Loire department offers a great choice in terms of heritage railways and tourist rail routes. The department has two heritage railways, including a steam service on the metre-gauge Chemin de Fer du Haut Velay, and a panoramic diesel car on the Agrivap line which runs to La Chaise Dieu. There is also a special tourist train in summer on the SNCF line through the Allier Gorge, departing from Langeac.
But in addition to these dedicated tourist trains, there are ordinary train services running on the  Allier Gorges route and across the Cevennes to Nimes on "La Ligne du Cévenol" , a spectacular single-track line with countless tunnels and viaducts. It is also possible to go by train from Brioude or St Georges d'Aurac to le Puy on a very scenic branch line, or from Arvant (near Brioude) to the foot of the ski resort with its telephériques at Le Lioran. All the local scenic rail routes go up to an altitude of over 1000 metres, and the station at Le Lioran is at 1152 metres.


The village has nothing..... except its peace and quiet and its beautiful location.

Villeneuve d'Allier (3 km) has a post-office and  a bar-restaurant. A new bakery/general store opened  in 2014 to replace the old bakery.

For shopping, there is Brioude, 15 kms away, with a full range of shops including a small hypermarket and a bustling Saturday market; Brioude also has a hospital, a train station, a new swimming pool, a lace museum, and an aquarium.

Lavoûte Chilhac / Saint-Cirgues (15 minutes by car) has a post office, a bakery, a butchers, a pharmacy, a tourist office, and a convenience store, plus three restaurants and a couple of cafés.

ACCESS
About 8 hours' drive from Calais, via the A71 / A 75 motorways, about 7 hours from Le Havre.  The gite is about 20 miles from the A 75 motorway exit 20. Brioude has a train station with direct services to Paris and Nimes. Nearest airports: Clermont Ferrand 1 hr (direct flights from  Paris, Brussels, Amsterdam ,  London .) or Rodez 2h 30 (Ryanair from Stansted)